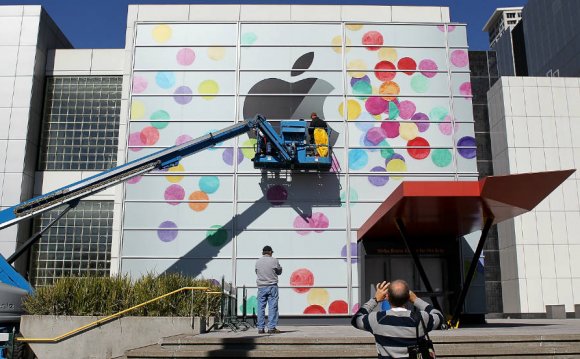 Director Alex Gibney's choice to follow this spring's Scientology slam Going Clear with the fascinating portrait Steve Jobs: The Man in the Machine might seem like an about-face. The first documentary clinically eviscerated a religion that everyone loves to loathe. Apple CEO Steve Jobs, however, is adulated to an incredible degree: Last week I wandered into a small Korean restaurant that had his picture hung on the wall.

But to Gibney, the pairing makes sense. Steve Jobs: The Man in the Machine is practically a sequel. Both Scientology and Apple were founded by now-dead gurus who commanded devotion. Both are corporations that claim to stand for something purer than greed. Neither pays fair taxes. And neither functions openly, speaks freely or tolerates critics.

Where the two films differ is us. Dismantle Scientology, and audiences will cheer. Chink away at the cult of Apple, and we all feel accused. I imagine that people will slink out of Steve Jobs keeping their iPhones guiltily stashed. When they make it a safe distance from the theater, they'll glide their smartphones in front of their faces, swipe the black monoliths awake and disappear into the dream machines of their own desires: where they want to visit, what they want to hear and who they want to reach. As MIT professor Sherry Turkle describes it, the iPhone that was meant to connect the globe instead made us "alone together." In the future, will historians wondering how society fractured look to Jobs' Apple as the original sin?

We love our smartphones. In the eight years since the iPhone 1, they've become necessities — almost a human right. Though they're made of circuits and wires, our attachment to these external brains is personal. They keep us company, and in turn we fondle them, sleep with them, flip out when they break. Which is why we have this documentary about their creator and not docs about the inventors of the subway, the shower, the fridge. Gibney's film asks "Why did Jobs' death make us mourn?"

Steve Jobs: The Lost Interview Now Available To Rent From ...