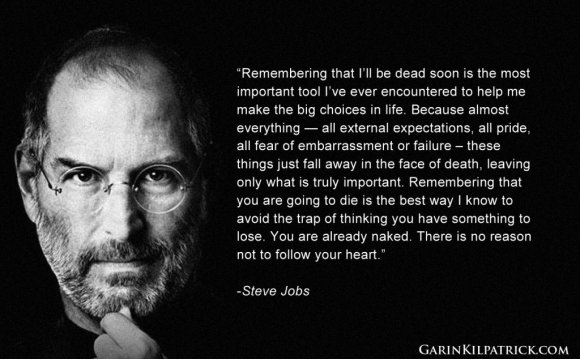 It took years of hard work, determination, and perseverance to build Apple into the company that it is today. When you take a step back from your MacBook (and put down your iPhone), and really think about all that he accomplished, it’s beyond remarkable. He changed the way we live.

Thanks to his many lectures and speeches, we have a glimpse into his day-to-day work ethic and how he managed to do as much as he did. And, in order to help you reach your career goals, we’ve rounded up 25 of his best quotes. Read them, be inspired by them, and then get out there and make your dreams come true.

My favorite things in life don’t cost any money. It’s really clear that the most precious resource we all have is time.

Your work is going to fill a large part of your life, and the only way to be truly satisfied is to do what you believe is great work. And the only way to do great work is to love what you do. If you haven’t found it yet, keep looking. Don’t settle. As with all matters of the heart, you’ll know when you find it.

Have the courage to follow your heart and intuition. They somehow know what you truly want to become.

I think if you do something and it turns out pretty good, then you should go do something else wonderful, not dwell on it for too long. Just figure out what’s next.

Sometimes when you innovate, you make mistakes. It is best to admit them quickly, and get on with improving your other innovations.

That’s been one of my mantras—focus and simplicity. Simple can be harder than complex; you have to work hard to get your thinking clean to make it simple.

Quality is more important than quantity. One home run is much better than two doubles.

Being the richest man in the cemetery doesn’t matter to me. Going to bed at night saying we’ve done something wonderful...that’s what matters to me.