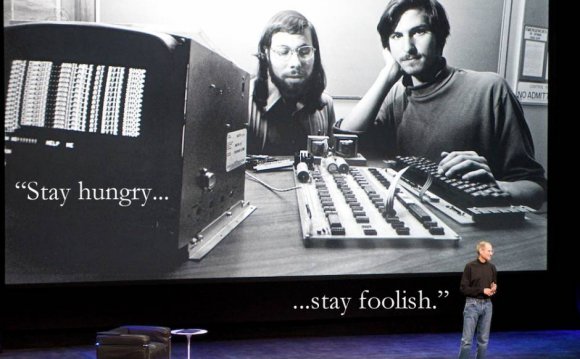 Not anymore, but for a long time, one of the best-known features of Apple software design was something called skeuomorphism.

Skeuomorphism is an ugly, confusing word.

iBooks was supposed to look like an actual bookshelf.

Steve Jobs loved skeuomorphism. He thought it made software easier for normal people to use — more approachable and immediately familiar.

The first piece of Apple software to demonstrate skeuomorphism was, arguably, the original Mac desktop operating system with its icons that looked like folders, disks, and trash cans. The original Mac OS also came with a calculator application that looked very much like a real-life calculator. Steve Jobs designed it himself.

After Jobs was fired from Apple in 1985, skeuomorphism faded as a design principle at company, though it would resurface in the Apple CD Player and in some of the optional "themes" for Mac OS 8 in 1997.

The other day, a source told us how Steve Jobs reintroduced the concept of skeuomorphism to Apple after he rejoined the company in 1999.

This source and some of his colleagues were working on a new version of Apple's audio- and video-playing application, Quicktime.

Jobs was very adamant that Quicktime "look like a real stereo, " says our source.

The team kept coming up with designs. Jobs hated them all.

Then, one day, Jobs came into a meeting with the design team with a piece of paper in his hand. It was a ripped-out page from a magazine. It was an ad for a Breitling watch, which had a brushed bevel finish that Jobs really liked.

He put the ad on the table.

We couldn't find the exact magazine ad Jobs ripped out in 1999. But here's a photo of a Breitling watch from that year:

Finally, the Apple designers got what Jobs was trying to say. They came back to him with new designs, and he approved them.